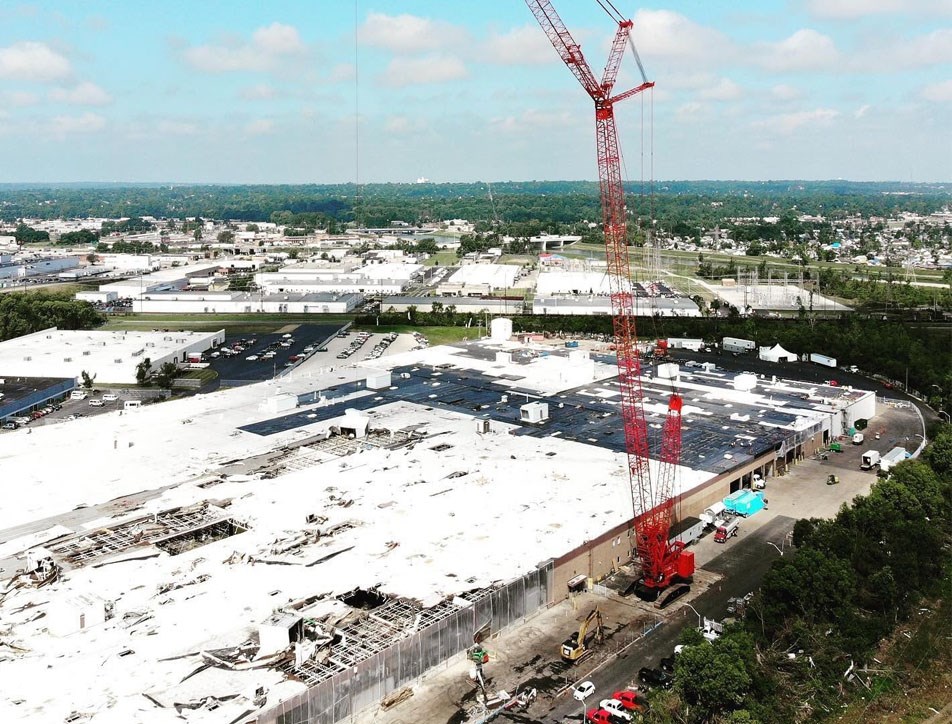 A tornado caused extensive damage to a massive industrial business in Dayton, Ohio, in May of 2019.

Wind speeds up to 170 miles per hour tore the roof from the building, left manufacturing equipment in ruin, and ultimately turned into the most significant commercial property loss that Sill's public adjusting team has ever been involved with.

Within hours of the incident, Sill's disaster response team met with DPG leaders to discuss their insurance situation. DPG quickly decided to bring Sill in to help them with what was ultimately going to be a massive recovery effort.

"Agreeing to use your services was one of the best decisions we made. The tornado was followed by the wettest June in the history of our city, and the size of our insurance claim grew exponentially. Dayton-Phoenix Group has an extraordinarily dedicated team that knows how to produce heavy industrial equipment, not how to deal with such calamities," said Darryl Patak, Chief Financial Officer, DPG.

Just days after the storm, Sill's team of building damage and contents experts began to inspect every inch of the property carefully. In the days, weeks, and months ahead, Sill compiled thorough documentation for the structural damage that needed repair.

Sill carefully negotiated terms with the insurance provider to establish a temporary workspace, some of which was in an offsite facility.

Our contents team itemized every piece of inventory, from parts to completed products that were ready to ship to customers when the storm hit.

Given the size of the property and the amount of devastation, this process took several months to complete.

Next, Sill's forensic accountants began to review financial records to establish loss of revenue. They worked with the insurance company to help DPG recover lost revenue under their business interruption coverage.

"From day one, our effort was to SAVE OUR JOBS!! With the help of Mike Hickle, Don Dragony, Chris Jensen, and Tom Radel, and their support team, we were successful in our endeavor. We had no idea just how difficult dealing with our insurance company would be. We relied heavily on your team's expertise throughout the process," said Patak.

The recovery process took more than three years to complete. Still, throughout the entire ordeal, DPG continued to pay their employees without any disruption, and they didn't have to lay off any of the workforces.

DPG was able to rebuild its business from the ground up. Along the way, they took the opportunity to build for their future, becoming more efficient with their building layout and inventory control.

Sill's team spent years working closely with DPG to assist them with an overwhelming amount of research, reporting, and negotiation to reach a successful settlement with their insurance company.

The company has rebuilt its operations and continues to be one of the largest employers in the Dayton area. Sill's team is incredibly honored to have the opportunity to work with DPG and help the company survive such a terrible disaster.

If you own or operate a large manufacturing business, a disaster like this could threaten your company's future. Get professional claims management assistance from Sill, one of just a very few public adjusting firms that have the capacity to handle a loss of this magnitude.